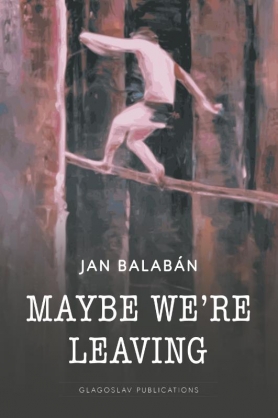 A young boy from the housing estates comes across a copse of old oaks to which he can escape, as to an oasis of calm. Although he may forget about it once he becomes an adult and "puts aside the things of childhood," it will remain a locus of balance, decades later, for a single mother struggling with the difficulties of raising the child she loves. A husband, on the lip of an ugly divorce, drives across town in the middle of the night to rescue his wife, abandoned by her lover, and then - as she falls asleep in the car - takes the long way home, to prolong a moment such as he has not experienced in years. An elderly doctor, self-diagnosed with Alzheimer's disease, makes use of the few precious moments of consciousness granted him each morning to pass on to his grandson what he has learned about life and living responsibly. Loss, and permanence, the ephemeral and the eternal, are common themes of Jan Balabán's collection of short stories Maybe We're Leaving, presented here in the English translation of Charles S. Kraszewski. With psychological insight that rivals the great novels of Fyodor Dostoevsky, the twenty-one linked narratives that make up the collection present us with everyday people, with everyday problems - and teach us to love and respect the former, and bear the latter.

Translation of this book was supported by the Ministry of Culture of the Czech Republic.

Jan Balabán was born in Šumperk, a town near the city of Olomouc in what was at the time Czechoslovakia, on 29 January 1961. He was raised in the city of Ostrava, which lies some 92 kilometres southwest of his birthplace. It is this city that forms the backdrop for most of his fiction.

He entered the University of Olomouc in the 1980s, where he studied Czech and English. Upon graduation, he began work as a technical translator in Ostrava. Up until the Velvet Revolution and the fall of Communism in 1989, his works were clandestinely published; like his brother the painter Daniel Balabán and so many other artists of his generation, he was a dissident.

Before his sudden and untimely death on 23 April 2010, he had published several books, mostly collections of short stories, in the now unfettered press of the free Czech Republic. These are: Středověk (Middle Age, 1995) Boží lano (The Rope of God, 1998), Prázdniny (Holidays, 1998), Možná, že odcházíme (Maybe We're Leaving, 2004), and Jsme tady (Here We Are, 2006). He also published two novels, Černý beran (The Black Ram, 2000) and Kudy šel anděl (Which Way the Angel Went, 2003), a screenplay Srdce draka (The Heart of a Dragon, 2001) and a stageplay entitled Bezruč?! (No Hands?!, 2009) in collaboration with Ivan Motýl. Zeptej se táty (Ask Dad), the manuscript of a novel that he was working on at his death, was posthumously published in 2010.